skip to main | skip to sidebar

ok here we are just a few days from the movie opening and things are going fast. premiere, hop on the redeye, fill in for regis, do letterman---all to mobilize our people and our people's people to see this movie so we can make more and more of them and take mulder and scully into their old age. or close. did the press junkets this weekend, 10 hours a day of answering the same question and as i blabbed on and on i realized a couple things---this movie is really about the eternal balancing act of love and work, of passion for a goal or quest and passion for a man or woman----this is mulder and scully i'm talking about. this partnership plays out in a emotional way while they are tring to solve this freaky (my kids' word) mystery that may unravel and unravel them. the case pushes mulder away from scully but also toward her, love and work impossibly intertwined until a choice must be made. what is the choice? see the movie.

batman's got everybody scared that we can't do business, and well, it is some kind of a box office juggernaut. but i want to believe. i want to believe that our loyal fans will go see us right away (see some of you at the premiere tomorrow) and they will bring friends who never watched the x files and they will tell a friend and we will become viral and keep growing and hang on for weeks. a boy can dream. see you at the movies.

my personal inspirations are orville redenbacker, mickey mantle and john berryman---today. ask me again tomorrow. chris carter wrote the sunflower seeds into the pilot. i don't like them so much because they are very messy. i prefer popcorn. as for music, i've been listening to a lot of steely dan --- mulder could've been a steely dan guy---and i'm also listening to technotrance and gorecki.

memorable guest stars on the show were lily tomlin, who never yelled at me and ed asner, who forgot my name. jack black and giovanni ribisi were on the same episode. shia labeouf was a guest star too.

in regards to current world issues, everything is political.

some of my favorite episodes of x-files are ice, piper maru, the post-modern prometheus, small potatoes, and bad blood. patrick stewart was the first internet sex symbol with hair but pileggi always thought it was him.

you guys asked for a set story or two. here's one---it was very cold. here's another---there was a commercial playing on tv at the time for a mexican fast food chain---a mouth practicing saying "gordita" i believe, perfecting its accent, and at the end, having perfected this accent, says in a high pitched voice---"nailed it". for some reason i loved that commercial, it tickled me. so after just about every take, especially one where my performance was lousy or something had gone desperately wrong, i would pipe in a loud falsetto---"nailed it!" to my delight, next xzibit started screeching nailed it after he screwed up and then amanda peet became a convert to the idiocy. so soon after every take, especially the bad ones, there was a chorus of "nailed it"'s. i believe, though i can't confirm it, chris carter was overheard to say "nailed it" on a couple occasions. so after the lights come up, after this movie is over, i would like to hear some nailed its from the fans. cause believe me, we did. we nailed it.

some quick answers---i post all in lower case because i am lazy and a bad typist. my basketball skills have eroded even as my understanding of the game has increased. i think if this movie does well, that will make it possible to do more x files films and those in turn would definitely swing back into the whole mythology area. it's just that this first time out after a long break, we didn't want to alienate, no pun intended, any folks who might feel they had to study up in order to understand what's going on in the movie. i think you get the wisdom of that. more later.

i've distilled your responses into a fine brew and i'll try to address the most prominent questions. seems you all want to know if it was hard playing mulder gain after 6+ years off from him. yes and no. there was a time in my life when i could fall out of bed and be mulder and i think i assumed that he would always be around like an old pair of boots (government issue). not so, i found. since i have gotten older, it made sense that mulder had to feel older too---otherwise i'd just be trying to squeeze him into this cartoony frozen in time, box. so it was really a process of feeling it out---the essential character of the man doesn't change, just as all our essential characters don't change, but different things come to light in a face over time, different emphases. if i sound a little mystical here, that's because it is. i think everything kicked into gear when i worked for the first time with gillian again, as mulder and scully. i think we acted kind of like pitch pipes for one another. i'm a little tone deaf so i don't really know what i'm talking about, but i think we were the keys for each other to slip back into those skins.

i don't think gillian will be on californication. i think we as a screen couple bring way too much history into a scene and would take any viewer out of the reality of what we were trying to do. alas, i think mulder and scully is probably the only acting that she and i will do together in this lifetime. i think if you think about it, you'll understand.

and as for the movie itself---there is no way we can satisfy all the people all the time. there are just too many fans with too many secret wishes, too many wanting too many things---and that's the good news. without all of you wanting this or that from the show, we wouldn't still have the pleasure of making it for you. but i can say this---i am pleased by the movie as is chris, frank, gillian and everybody who has seen it. it's smart, scary, has a lot of the old mulder scully thing and takes us back into a world that we missed. there won't be some of this and there won't be some of that---but there will be a lot of satisfaction. i really feel that in pleasing ourselves, we will have pleased you.

keep writing, i will keep evading and answering.
dd
Posted by David Duchovny at 10:27 AM 178 comments:

X Files I Want to Believe 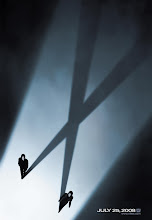